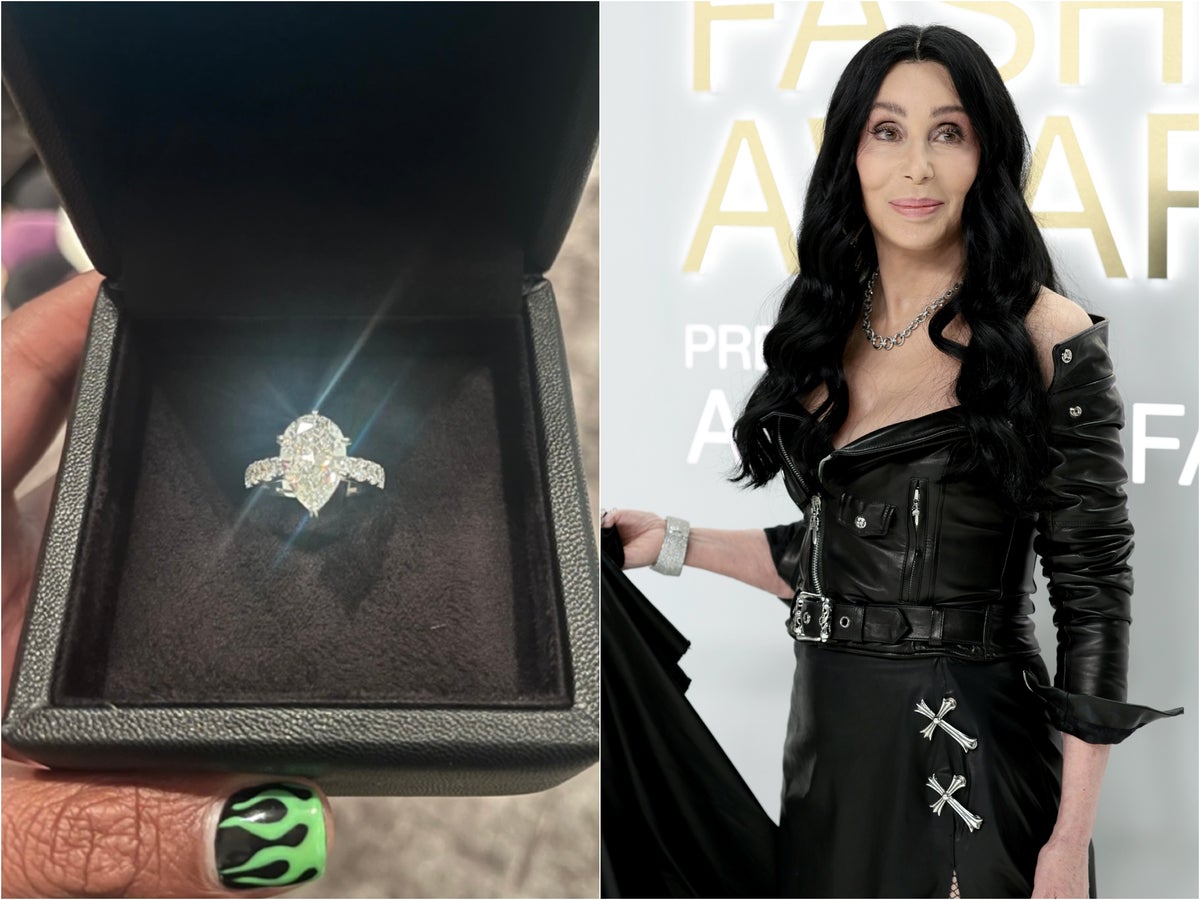 Cher has prompted speculation that she is engaged to boyfriend Alexander Edwards after posting a photograph of a huge diamond ring on Christmas day.

The “Believe” singer, 76, showed her four million followers on Twitter a stunning ring with a large teardrop-shaped diamond and smaller diamonds around the band. She accompanied the picture with the caption: “There are no words. Alexander, AE.”

The ring was displayed in a black box held by Edwards whose thumb could be seen in the photo, featuring a green and black flame manicure.

Cher confirmed her relationship with the 36-year-old music producer in November, declaring that he treats her “like a queen” and that “love doesn’t know math”.

While she did not confirm if she was now engaged to Edwards, fans were quick to congratulate the couple and send them well wishes.

“OMG did he propose to you!? Mama lovely,” one person wrote, while another commented: “A beautiful ring for a beautiful woman! Merry Christmas!”

Cher has been married twice previously. She was married to her singing partner Sonny Bono from 1964 to 1975, and later to singer Gregg Allman from 1975 to 1979.

In a follow-up tweet, however, the “Strong Enough” singer stirred up confusion after posting the same photograph of the ring but with the caption: “I posted this cause his nails are so cool.”

“So should I cancel the order for the dress I was gonna wear to the wedding or..?” one fan joked.

Another added: “Spill the tea, are you getting married or no, we need to know!”

Last month, Cher revealed that she and Edwards “[kiss] like teenagers” after sharing a photograph of him shirtless.

She described the music executive, who works at Universal Music Group, as “kind, smart [and] hilarious”.

Speaking on The Kelly Clarkson Show in early December, Cher opened up about her new relationship and said it appeared “kind of ridiculous… on paper”.

“But in real life, we get along great,” she added. “He’s fabulous. And I don’t give men qualities that they don’t deserve.”

How the Murder of JonBenét Ramsey Became a National ObsessionPro Teachs Relationships: If a man has these 9 qualities never let him go, scientists say- Pro Teachs ‘Only slightly embarrassing’: Olly Murs reveals he needed help getting back up after proposing to fiancée- Pro Teachs