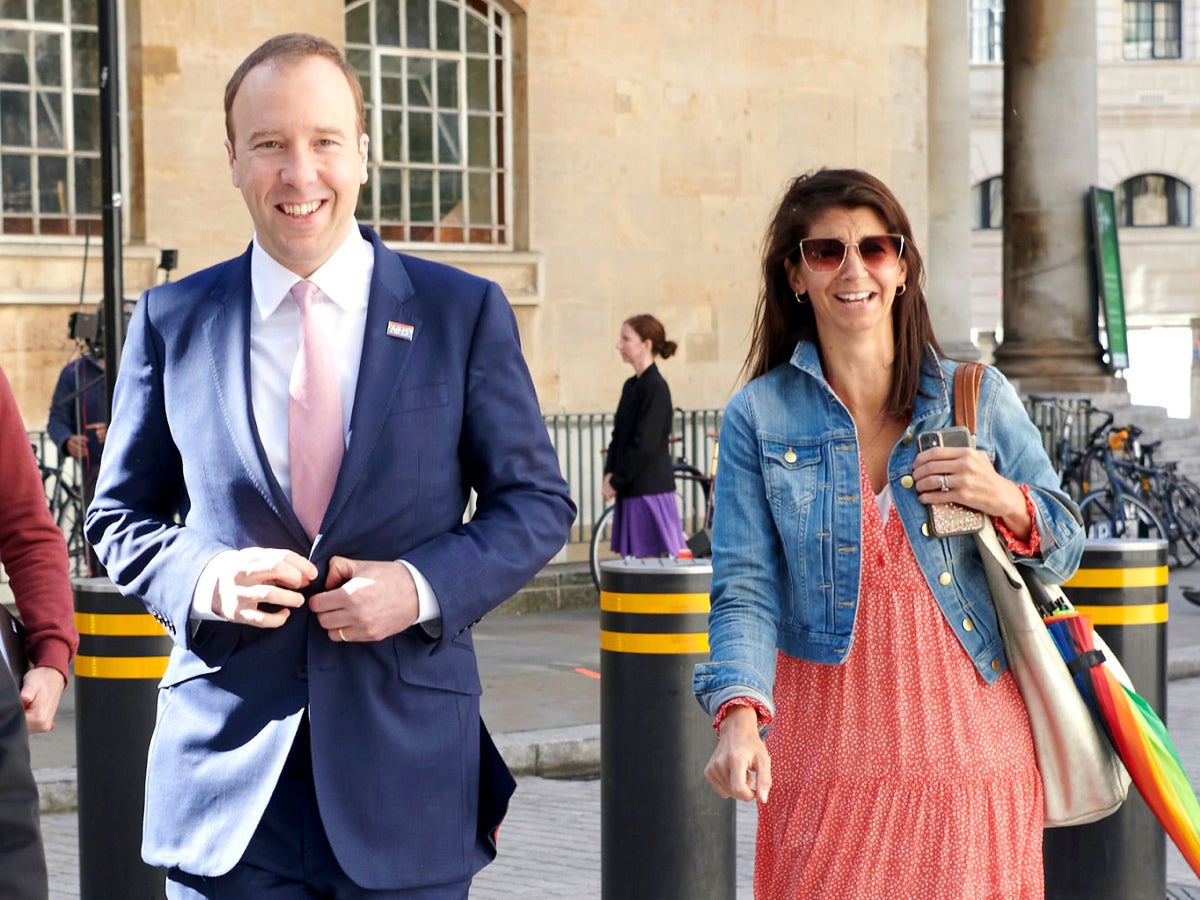 Matt Hancock has emerged from the jungle after his controversial appearance on this year’s I’m A Celebrity… Get Me Out Of Here!

The former health secretary’s presence in the Australian jungle incensed many viewers who remember some of his more contentious decisions during the Covid-19 pandemic, as well as the manner in which he resigned.

Parliament’s watchdog for the Commons Code of Conduct received dozens of complaints about Hancock’s involvement, but it was not investigated as it did not break any rules.

However, his decision to join the cast on the popular ITV show led to him to be suspended as an MP by the Conservative party.

While Hancock made a series of calls that were highly criticised during the pandemic, he did not resign until it came to light that he had broken his own social distancing rules after being caught kissing his aide, Gina Coladangelo.

Soon after the news broke, Hancock separated from his wife of 15 years, with whom he shares three children. He has since taken part in other programmes, including Steven Bartlett’s Diary of a CEO podcast and Channel 4’s Celebrity SAS: Who Dares Wins.

Hancock reunited with Coladangelo after the finale of I’m A Celebrity, in which he landed in third place, behind Hollyoaks star Owen Warner and winner Jill Scott. On Thursday night (1 December), the cast of this year’s series will come back together for a reunion episode on ITV1.

Here’s the complete timeline of Hancock and Coladangelo’s relationship, from when they met to the present day.

Matt Hancock and Gina Coladangelo first crossed paths while studying at Oxford University, where they worked together as presenters on student radio.

They both studied politics, philosophy and economics (PPE) from 1995 to 1998.

It was during this time that Hancock also met Martha Hoyer Millar, who he would go on to marry.

After finishing university, Hancock and Coladangelo’s careers went in different directions. Hancock became an economist at the Bank of England before entering politics as an economic adviser to George Osborne in 2005 when the latter was Shadow Chancellor or the Exchequer.

He later became the Conservative candidate for West Suffolk in January 2010, and was elected as the constituency’s MP later that same year. After rising through the ranks, he went on to hold the positions of Secretary of State for Digital, Culture, Media and Sport before becoming Secretary of State for Health and Social Care.

On the other hand, Coladangelo became communications director at Oliver Bonas, which was founded by her now-ex-husband Oliver Tress. She was also a director and major shareholder at Luther Pendragon, a lobbying firm that helps clients gain a “deep understanding of the mechanics of government”.

Although the pair did not work together until more than two decades after they first met, it is believed they remained friends.

Martha Hoyer Millar was married to Hancock 15 years until they separated last year. She is the granddaughter of Frederick Millar, who was the 1st Baron Inchyra and served as British ambassador to West Germany from 1955 and 1956.

She is also the great-granddaughter of William Berry, 1st Viscount Camrose and co-owner of newspaper titles including The Sunday Times, Financial Times and Daily Telegraph.

Coladangelo was married to Oliver Tress, founder and head of British retail chain Oliver Bonas, for 12 years before they split up over her affair with Hancock. They share three children.

Hancock appointed Coladangelo as an unpaid adviser to the Department of Health and Social Care (DHSC), under a six-month contract in 2021. According to The Times, there was no public record of the appointment.

Coladangelo was later appointed to the board of DHSC as a non-executive director, with a taxpayer-funded salary of £15,000 for two to three days of work per month.

The Sun published bombshell security camera photographs of Hancock embracing Coladangelo in an exposé that ultimately ended his career as health secretary.

The newspaper referred to the embrace as a “steamy clinch”. It is believed that the pictures were taken inside Hancock’s Whitehall department when two-metre social distancing rules were still in place at workplaces due to Covid.

It caused huge uproar throughout the country as many found it unfair that Hancock had broken his own guidelines when many people were unable to physically touch or be close to their loved ones.

After initially refusing to resign, Hancock quit after admitting that he broke his own guidelines.

Coladangelo also reportedly stepped down from her position on DHSC’s board after Hancock resigned.

In December 2021, he told ITV’s Peston that he did not resign immediately because he was focusing on his “personal life”. He added: “I had blown up every part of my life, and I concentrated on my personal life first as you can probably imagine.”

28 February 2022: Matt Hancock opens up about affair on podcast

In a tell-all interview with The Diary of a CEO podcast, Hancock said he broke social distancing guidelines because he “fell in love” with Coladangelo.

He told host Steven Bartlett: “I resigned because I broke the social distancing guidelines.

“The point is they were the guidelines that I’d been proposing. That happened because I fell in love with somebody.”

Matt Hancock took part in this year’s I’m A Celebrity and finished third. In a special reunion episode that will air on Thursday (1 December), he will be shown reuniting with Coladangelo and attending a wrap party.

In the episode, Coladangelo reveals that she and Hancock spent the summer “[trekking] around Mont Blanc together in four days”.

She added: “I think it’s fair to say that Matt underestimated the scale of the reaction to him coming into the jungle.”