After a hop, a skip, a jump of joy and a fist pump, Pradosh Ranjan Paul dug his bat into the ground like a sword, put his helmet on top of the handle, and bowed to the Tamil Nadu dressing room. Pradosh, the first cricketer from the textile hub of Tiruppur to play in the Ranji Trophy, celebrated his maiden first-class century like a warrior who had just conquered the Kotla fort. Pradosh’s 124 at No 7 not only gave Tamil Nadu the crucial first-innings lead after they were 200 for 5 in pursuit of Delhi’s 303, but it has also given them an outside chance to win outright on the final day, if the weather doesn’t play spoilsport.

Before Thursday, Pradosh had scored 29 centuries for Tamil Nadu across age-groups. The 30th came against the same side he had made his Ranji debut against nearly four years ago. Back then he had scored 78, his only fifty in five previous first-class games.

“It was a special moment for me, I was a bit emotional as well. I made my debut four years ago. I didn’t get to play many matches. This knock means a lot to me. I expected the hundred to come a little earlier but I am very happy,” said Pradosh.

With the sun playing hide and seek, Tamil Nadu captain Baba Indrajith declared their first innings at 427 for 8 with the visitors leading by 124 runs. Anuj Rawat fell at the stroke of tea and thereafter only two balls were bowled in the final session before the umpires called off the third day’s play with Delhi at 28 for 1. The hosts are still 96 runs behind going into the final day. “We were told to play till tea and then the light suddenly dropped so it was decided that we would declare and try to get two wickets by end of day,” said Pradosh.

When asked about his partnership with the seasoned Vijay Shankar that steered Tamil Nadu out of trouble, Pradosh said: “In the morning we decided not to look at the scoreboard and tried to play one over at a time.” 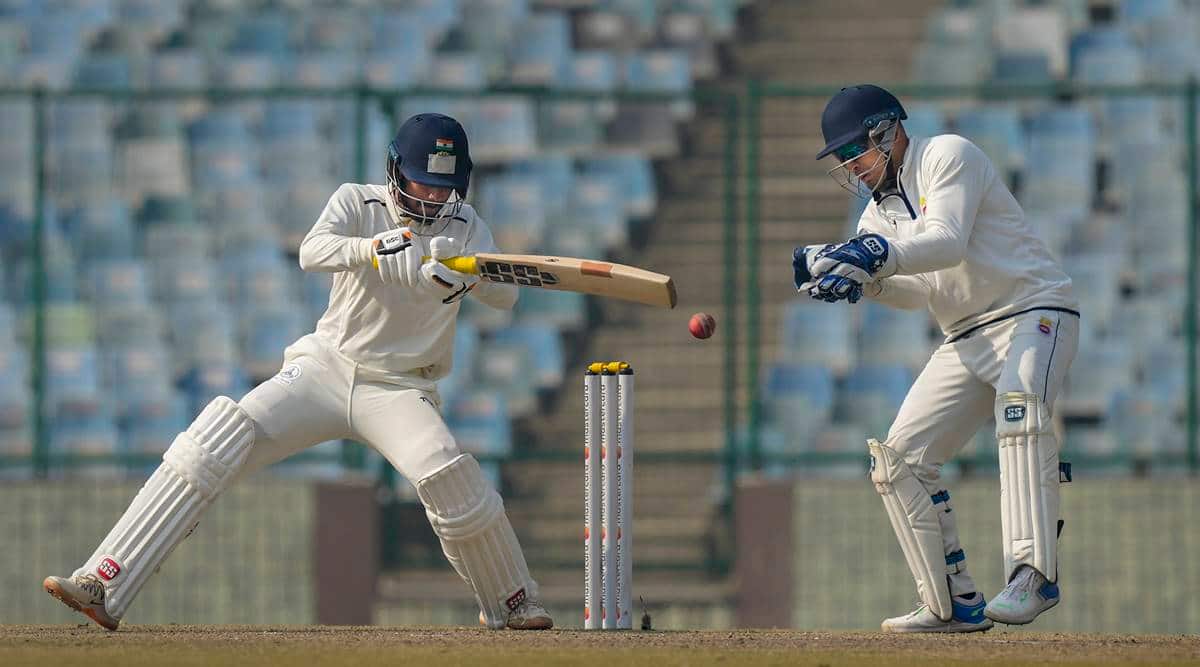 The southpaw said that there were butterflies in his stomach once he reached the 90s but he showed no visible nervousness as he played a perfect scoop shot at 92 off Harshit Rana.

Pradosh is not muscular or tall, but he looked like a very busy player. He rotated the strike well, ran hard between the wickets, used his feet against the spinners, punished the bad balls and was hardly troubled by the inexperienced Delhi attack.

Pradosh, who has captained Tamil Nadu across all age-groups showed why his “temperament and attitude” is rated highly by his childhood coach V Ramesh Kumar. “Right from his Under-14 days, his temperament and attitude stood out. There were days when I had to pull him out from the nets and send him home. He missed the century on his debut but I am glad he has got one now,” Ramesh Kumar told The Indian Express from Tiruppur.

From Bhubaneswar to Tiruppur

Pradosh’s family hails from Odisha, but ten years ago, his father Pradeep Paul, a bank employee, was transferred to Tiruppur, 1600 km from their home in Bhubaneswar. The then 12-year-old Pradosh found life difficult at his new home initially.

One day, while returning from school, he saw a pamphlet announcing a summer coaching camp at Ramesh’s Tiruppur School of Cricket academy. Ramesh took him under his wings and his journey towards professional cricket began. Six years later, Pradosh became the first Ranji Trophy cricketer from Tiruppur and Ramesh said that his rise has helped cricket grow in the region.

A fantastic 124 from Pradosh Ranjan Paul put Tamil Nadu in a strong position at the end of Day 3 in the #DELvTN clash as Delhi trail by 96 runs in the second innings. #RanjiTrophy | @mastercardindia

Here’s how the action unfolded🎥 pic.twitter.com/rJKsr5h1vK

“He is our mileage, the first from our region to play first-class cricket. After he represented India U-19, we had to put turf wickets in our academy, because there was a sudden rise in registrations. He is already a star here,” said Ramesh, who is also the head curator of the Tamil Nadu Cricket Association (TNCA).

Ramesh called Pradosh a “natural leader.” “He is a team man. He has always been a top-order batsman but today, he was batting at 7 because of the team combination.

The youngster has given the visitors an opening and with the ball staying low, Tamil Nadu spinners Washington Sundar and R Sai Kishore must be licking their lips. But a lot will depend on the weather; in three days, only 76, 75.1 and 70 overs have been possible as the light deteriorates quickly in the third session. PSG Vs Toulouse Live Score: Lionel Messi likely to start as Neymar, Mbappe sit out due to injuries Pro Teachs